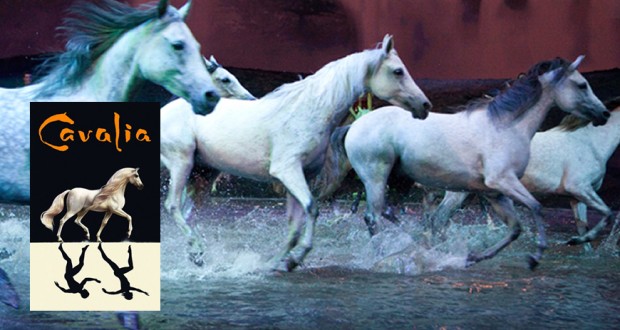 Posted by: Scottsdale One Editor in Entertainment, Performance Arts 1,390 Views

Looming ten stories high above the Loop 101 in North Scottsdale one can see a large white tent as big as a football field. What is it? A circus? A sporting event? Temporary housing? Upon closer inspection, the flags flying 125 feet high at the top of each spire read Cavalia.

The very name of this show conjures up images of majestic horses, athletic performers, and original spellbinding music. Cavalia brings breathtaking elegance and excitement to an otherwise empty field in the Valley. This year, they bring their newest show Odysseo. The second incarnation of Cavalia, Odysseo is an all ages show that will astound and delight you. Every detail of the show is meant to be as effortless for audience members as possible. Upon arriving, there is ample parking clearly marked and guided by traffic controllers. Greeters are standing outside to guide you around the maze of tents. For the full VIP experience, choose to join the best in the Rendez-Vous or Horse Lover’s Tent before and after the show. The experience is completely worth it with wonderful ambiance, cushioned couches to sit on, an open bar serving beer, wine, and champagne, and a buffet of food designed to cater to anyone with everything from salads, to tortellini, hot dogs and much more. Real silverware and glass drink ware bring that extra touch to the experience. Once inside the big top, you are able to purchase drinks in plastic cups as well as popcorn and ice cream.

No detail has been spared in making the magic of Odysseo. From the moment you enter the tent, you will feel as if you have been transported into a mystical forest. Believable looking trees line the outside and inside perimeter, and while I was expecting to sit on bleachers, I was very pleasantly surprised to see all of the 2,000 seats have backs to them making the two hour show incredibly comfortable to watch. During the summer months, the tent is air conditioned, but right now it is heated as the temperatures in Scottsdale have begun to drop considerably at night.

The lights dim, and a hush falls over the audience as the vision of Artistic Director and Creator Normand Latourelle begins on a 15,000 square foot stage made of stone, sand, dirt, and at one point 80,000 gallons of water creating a shallow indoor lake for the horses and actors to frolic and dance in. The lake is created by a series of pumps and backstage water tanks. The water is drained at the end of the night by the same pumps and re-used. The background images emanate from three IMAX screens making you feel like you’re right there with them. During the show, 39 artists from all over the world, and 53 equestrian performers from over a dozen breeds take to the stage running, dancing, riding in a variety of styles, playing and singing. In the areas of the arena where one would usually see box seats, the musicians are seated and subtly lit singing and playing instruments. That’s right, all the music for each show by composer Michel Cusson is performed live each evening to match the tempo of the horses.

The four legged performers are given a lot of liberty in their performances. Though 68 saddles are utilized in the styles of Trick riding, English, Dressage, Cosack, and Roman riding, most of the time the horses run in sync with no saddles or bridles at all. They take their non verbal cues from their trainers. The average age is 9 and a half years for each horse. Lovingly fed a diet of hay, grain and carrots they are trained between six months and ten years depending on the difficulty of their part, and their willingness to learn. Every emotion will be evoked throughout the evening from awe at the aerial acrobatics, to wonder as it seems you have traveled to the Easter Islands, to a great rush as the riders perform trick riding in a round arena, to childhood delight as a real rotating carousel appears. There is laughter as the Appel d’Afrique approach the audience directly and encourage you to shout with them “O walu guere moufan!” which is translated to “No more war!” and even to tears at the pure beauty of it all.

During intermission you can return to your tent where coffee, tea, and dessert is served. There is a choice of pastries, cakes, and fresh fruit. After the show, the horses are taken into their on site stables, washed, and groomed. Have patience, and you can get up close and personal with the horses as they have their mane braided and graze on hay. The cast is composed of stallions (more than in any other show in the world), and geldings. Just like people, each horse has his own personality and name from Acero to Zinco. Some seemed very tired after the performance and were resting, taking little notice of the people surrounding them. Others, like the appropriately named Lover were sticking their noses close, and even showing off a bit. At any time, you are able to stop by the Odysseo Boutique where you can purchase souvenirs like coffee cups, clothing, calendars, and even puzzles. Based in Quebec, Canada, they perform all over the world. Be sure to get your tickets early as they are sure to sell out. It is an evening that the audience will never forget.

Cavalia’s Odysseo- A Scottsdale One Exclusive 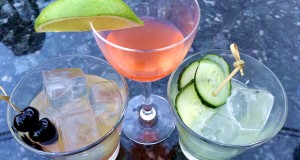 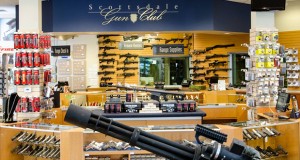 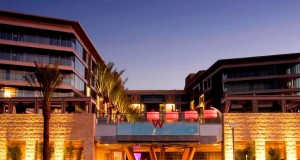